The tow down was uneventful - we arrived, signed a waiver to get into the paddock, found a spot and setup, then later went and registered for the event.  Since we were the LAST racing group, we had LOTS of time available the following day to unload Bullet and do our pre-race checks.

This event was the first in the country for the new FV SPEC TIRE, however,  our first session on Friday morning was a practice, so I opted to go out on a set from last year so I could attempt to compare against the Spec Tire in the next session.  The practice went well and our fastest lap was good and quite close our best time in 2017 (we had a conflict with the 2018 event).  The second session was Q1 so I went out on a sticker set of the Spec Tires and turned a nearly identical time that was good for the pole with Donnie and Laura close behind.  On Saturday morning, times were a little slower, but it appeared that the track had slowed a bit since FF times were also slower. Unfortunately, Dan Grace lost control in the high speed T17 and went headon into the tire wall, bending his front beam and the right front spindle.. ending his weekend.

Saturday Race - Everything started off pretty nice.  I got a good start with the FF's and F5's ahead and the Vees all together .. until we got to T7.  Up ahead of us, 2 FF's got together under braking and both hit the concrete wall pretty hard just after what would have been the turn-in points. I was confident we'd get the double yellows soon and around T15 onto the back straight, there they came. Coming by T7 the next lap I noticed Harry Schneider off between 7 and 8 (I later found out he had a suspension failure). After 2 laps of yellow, we finally restarted and I kept the lead, but with both Donnie and Laura right on my tail. Going into T4 an FF spun in front of the F5 right behind him.. both JUST in front of me - then the F5 spun to avoid. I got by and so did Donnie before the window closed on Laura,  so she dropped back several seconds while Donnie and I soldiered on. At the end oif that lap, Donnie passed for the lead as the 'spun' FF and F5 caught us and went by. About that time, Donnie started dropping fluid ..as has been the case at most races in the last couple of years. Huge plumes of fluid pouring out all over my car and helmet shield and camera as the 2 F5's blew by me going into T17 (guess the 1st spun again) .... putting themselves momentarily between Donnie and I, but I passed 1 of them into T2 - leaving the other just in front of me. The 2nd F5 then passed both vees before T7 about the same time the 1st one SPUN (yes, again) on his own under braking into T7... So, now we are F5-FV-FV-F5 (with the FF elsewhere on the track). Another lap goes by and we get the WHITE (last lap) flag.  We are still the same F5-FV-FV-F5 but I have closed up behind Donnie and am now less than a second back.  We come onto the back straight and I'm closing on Donnie... closing... I pull out to pass and am I N C H I N G by, but I'm gaining less and less.. DECISION time as we approach T17 at full speed.. I back off at the last instant and try for my best line inside line coming onto the front straight.  Donnie goes just a tad wide and I'm in front.  He's coming back up on the outside and I leave him room and still manage to JUST hold on for the win even though I got slightly balked by that first F5 that seemed to develop some sort of problem coming through the turn. The last lap finish is available on youtube.. https://youtu.be/1i53VPe57rU if you'd like to see it.  Sorry about the stuff on the camera lens .. some times I just don't have enough time to clear it often enough during the race.

Laura, who got blocked by that early FF spin was a few seconds behind Donnie and I but still managed to pull off the LAP RECORD in the new FV Spec Tire era with a 2:42.x while Russell Fredericks rounded out the top 4 as he gained familiarity with his rental ride for the weekend.

Sunday Race - I retained the pole because even Laura's lap record time in Race 1 was still slower than my time from Q1.  Coming out of of T17 on the pace lap, Donnie got an unbelievable start and was 2+ carlengths in front of me before the green was waved - but it didn't really matter. Russell also jumped in front of me going into T2, but that also didn't matter (much

). I passed Russell and was in front of Donnie before T7.. but he held the inside line and retained the lead. At that point, another FF hit the concrete ahead of us, and we got DY as we passed T12.. so, no passing from there on that lap.  Unfortunate for me since about that time Donnie started spewing oil again - covering my visor and car.  We spent 2 more laps under DY until the restart which left the vees in the back - Donnie, me, Russell and Laura (Harry was unable to start due to his broken suspension from yesterday's race).  Through T7 and then Russell makes a dive inside of me into T10 while Laura seems to be falling off the pace a bit. Russell seems to have finally gotten a handle on his rent-a-ride and is 'in the mix'.. kinda good for me since HE is now taking the brunt of Donnie's oil spray. Complete that lap and back around to T7 where I am able to get around Russell again and Laura is now well off the pace.  Down the back straight I finally make the pass over Donnie for the lead .. but it is short lived since he passes back going into T1.  As we come into T1 on the next lap, Linda radios that the SEVEN CAR lead pack of FF is coming up on us.  With a little luck they won't catch us until the back straight. Laura is now gone from my mirrors so anything I see must be FF - sure enough coming into T10 I catch a glimpse of 'something', but something must have happened because they didn't catch us for 3 more laps .. and even then they didn't catch us until the back straight. On the next lap, Russell passes both Donnie and I going into T10 and takes the lead.  We made it down the back straight and Donnie retook the lead... through T16 and 17, then onto the front straight... suddenly they show up.... 1..2,3,4,5....6..into T1...7 .... T2 .... 8! Wow.. into T4 then # 9 at T10 and #11catches us at T13.. but stays behind the tight battle of 3 vees (thank goodness) and then passes on the back straight. Unfortunately for me, since I HAD to keep an eye on the FF behind ... expecting him to dive inside of me at every turn, Donnie managed to pull out a full 3 second advantage on that lap. Not much to do but give it my best shot... I close at every turn and by T10 I'm less than a second back before another FF comes up on me from behind.  I point him by at T11.. but he doesn't pass.  I have to leave room for him at T11 and 12 and lose more ground to Donnie.. then he finally passes both of us at T13 .. giving Donnie a nice tow onto the back straight.  With my draft from Donnie, I still manage to close up to his gearbox... we should get the White last lap flag at S/F and I prefer to be second coming down that back straight for the last time.  Now, I notice that Russell has closed back up on us and we are now THREE.... so have to keep him in mind during the rest of this lap. Donnie seems to be slow... (maybe to keep Russell in the mix? to give me more to think about?) - but I'm still not yet ready to pass him. Around to T14 with Russell falling behind.. then Donnie suddenly slows at T15 - closing both myself and Russell back up behind him... sly trick...  Donnie accelerates away, but immediately sees that I'm going to catch and pass him.. so he slows again to make me pass early.. and with no real momentum.  I get by him, but then he slows my pass and starts to come back on me.. but not quite enough and backs off just as we enter T16.. he sets up wide and dives inside of me as we turn HARD for T17 ..and then SWEEPS across my nose from inside to outside and I have to lift a tad to not hit him (or get hit), but I tuck in and try to use the tighter inside line just about the time that Russell tries to follow Donnie through and clobbers me in the right rear tire.  We both slide sideways a bit but continue on as Donnie opens the gap due (at least) to us going sideways and wins the race.  Me second and Russell 3rd. Almost identical finish to Saturday except that Donnie and I are reversed.  Laura apparently deveoped an engine problem and came into the pits a few laps back.

Wow .. 2 TIGHT races with Donnie and I swapping 1st and second places each day.  Russell also managed to reset the LAP RECORD by digging out a 2:41.9 to just beat out Laura's record from Saturday.  Not a bad weekend for our team.  A long way to go in the season and Donnie, Myself, Harry Scheider and Dan Voss (who swapped 1st and 2nd at the Homestead race the weekend before) are all TIED for first place in the Southeastern Conference.  We'll see how that changes in a couple months after our next race at Road Atlanta. 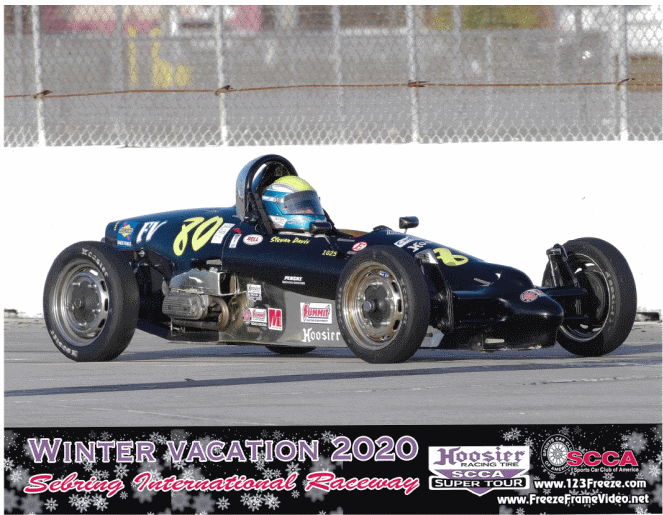 Vicki on the track at Sebring

I put the last lap on youtube again ( https://youtu.be/wEcwyNDgqFY ).  A little earlier in the day so the sun doesn't affect the camera as much and I did a MUCH better job of wiping the oil off the camera lens 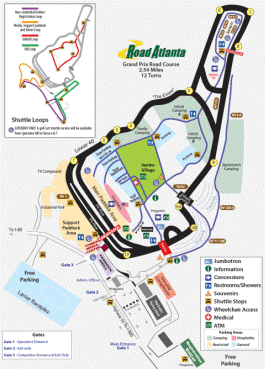 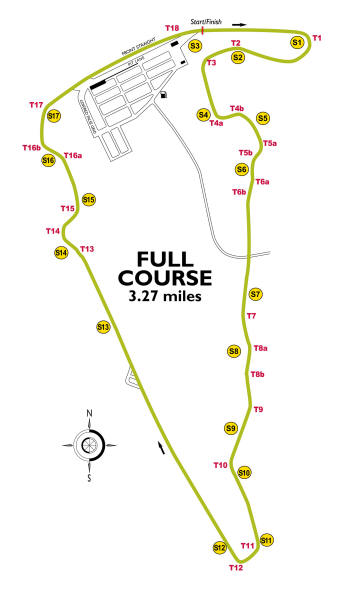 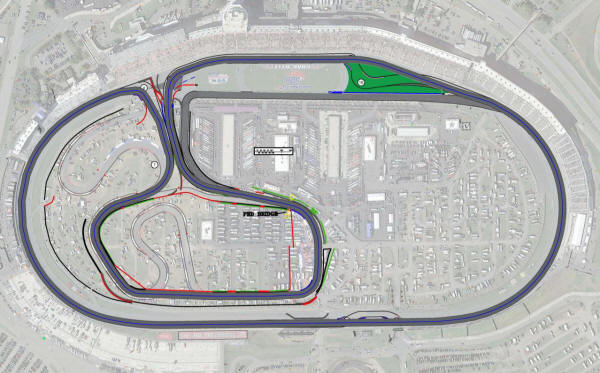 Went to Mid Ohio instead.

Not a great week for us.  Started 15th and could only move up to 10th.  Had transmission issues at Barber practice event and could not get them sorted out properly in time.

Thanks as always to Rollin at ButlerEngines.com, JR at RoxannesHeaders.com

and ... Mike, John, Tim and Bruce at Hoosier tires (RaceTire.com) and Dietmar at QuixoteRacing.com

.  Not to forget my wife, Linda, who travels with me to almost every race, and suffers me the joy of racing for all these years!

All rights reserved - ©Copyright 2001
This website supported by WedgeTek, Inc.
Please send comments to the webmaster